A few weeks ago I spoke with Adnan Rashid. Adnan Rashid is a senior researcher and lecturer for iERA (Islamic Education and Research Academy). He is a historian with a speciality in the history of Islamic civilisation, comparative religion and Hadith sciences. He also takes a keen interest in Islamic numismatics, ancient manuscripts and antiques. He has debated many high profile figures in the field of politics, history, theology and Christianity. (Yes, this was pasted from his profile page). Adnan has dialogued the likes of James White, Jay Smith and various other individuals on the subject of Islam and Christianity. 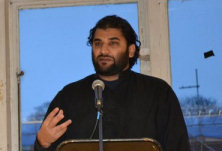 Brother Adnan has requested that I put out an open challenge on his behalf to Ergun Caner for a public dialogue on the subject of Islam and Christianity. Ergun has spent ample amounts of time speaking on the subject of Islam in Churches and on Christian television but he has never actually spoken on a public platform with a Muslim. Although it is clear that Ergun does boast to have had 48/61 debates with Muslims, there is no record of such debates to have taken place. He has written books against Islam and has been speaking against it for such a long time, whilst boasting that he is ready to debate anybody, anytime and at any place. Thus, this is an opportunity for Ergun to come out and do what he says he does best – debate.

The topic of Islam and Christianity is vast and thus a general dialogue as such would need several days; it is therefore recommended that the debate be narrowed down to a specific topic such as Qur’an or the Bible?, Is Jesus God?, The Truth about Jesus, Is Muhammad (pbuh) a true Prophet of God?, Which is The True Religion of God?, What is Jihad? Etc Unless Ergun is happy to have several debates  on all topics over a period of time?

This challenge is clear, open and awaiting a response from any of Ergun’s representatives. The request for a debate has also been submitted to Ergun yesterday on his website. Additionally, a personal email regarding this matter has been sent.

Let's wait and see if Ergun can defend his representations on Islam, or will he be happy to continue brainwashing gullible Christians unchallenged?