When I first bumped into Ergun Caner in early 2009, I found it very difficult to get my point across to his fans who thought he was such a wonderful guy having left the "evil cult" of Islam and abandoning his "extremist" Muslim father to pursue a life of happiness with his "heavenly father". As we have already learnt, his conversion story is 95% fake. Yes, he did convert, but did he convert from Islam? No.

The one realistic way to get the attention of his supporters and audience was through his Facebook fan page. Don't be mistaken by the fan page that exists today called Ergun Caner, this one is not run by him. Prior to September 2009, Ergun had his own fan page which he himself was the moderator of. The page was called "Ergun Mehmet Caner" (even though his name is actually Michael). He had thousands of fans who he would interact with regularly, usually it would be making fun of Muslims being terrorists and just being rude about Islam in general. 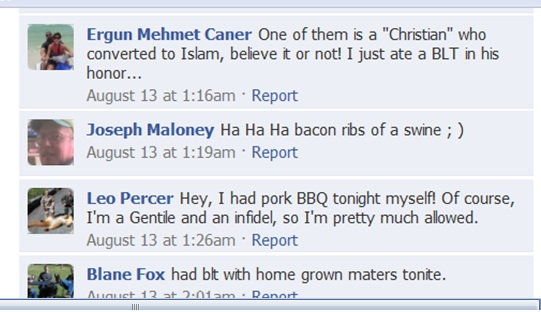 These inappropriate mockeries were of course, in addition to his humorous anti Islamic posts he would put up whilst his trusting supporters would praise him without even looking to see if what he was saying was true.

"Who is Baruch?" (The Prophet he made up)

"Why did you lie when you said your father was a Scholar?" (His father wasn?t a Scholar)

"Why do you not know the Shahadah?" (He confuses it with Bismillah)

"Why do you think Ramadan has 40 days when it doesn't?" (Surely he would know if he observed the month of Fasting)

However, rather than answering these questions, Ergun would delete them, sometimes even within seconds of them being posted! On occasion when he was slacking, they would stay up for about an hour and we would get countless comments from his supporters saying we do not know what we are talking about and we are just hating on him etc.

If you look at the example questions above, you will see that they are not rude or malicious in any way, shape or form. On September 30th, around a hundred of my group members all commented on the same day, hoping that Ergun would realise we are not going to leave until he concisely answers our questions.

Eventually he posted a comment saying "There will never be a time to answer these silly and infantile men, because they have no arguments.", he then went on to say that it does not matter what age he was when he "left Islam". It was clear to us, his page members and others looking on that he could not properly answer a single question. But we kept asking, asking, asking and asking ; whilst he kept deleting, deleting, deleting and deleting. He could not sit there deleting multiple comments appearing simultaneously so eventually he gave up. Rather than doing the thing an honest person would have done and answer the simple questions to clarify the issues raised, he shut down his group and sent out the following message: 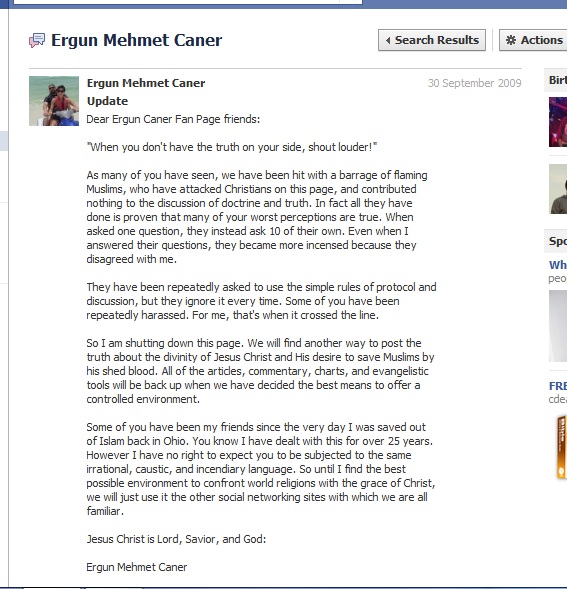 As you can see, he tried to play the sympathy card of how he is a "struggling former Muslim" who has to put up with these kinds of "attacks". The reality of the situation is that he lied, he knows that he lied and he had no answers (still has none), not knowing what to say. So he shut down the page. He wrote in the post that he answered our questions; and yes I will give it to him that he did make the effort to post answers to the 40 days of Ramadan and the fake Prophet Baruch, but the rest of was just brushing off what was being asked. The posts he did publish regarding the Prophet Baruch and 40 days of Ramadan were laughable. Not only were they laughable, but the excuses he was giving at that time are in complete conflict with the excuses that Norman Geisler is making up for him!

It is common amongst people like Ergun to work off of the emotions of his gullible fans. It is sad that most of them actually believe he is former Muslim who is persistently going through a hard time because of his "conversion". This is of course, nonsense. That message he posted on 30th September 2009 is a clear example of how these "former Muslims" do this. I made it very clear and my supporters obliged when I told them to not be rude or mock him or his supporters in any way: 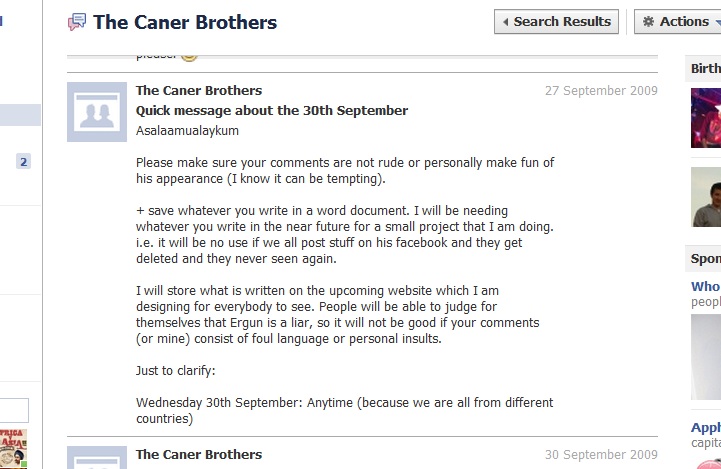 So you see - for Ergun to run away like that, shut down his group and then go on to play the "this is what former Muslims have to put up with" card, he only dug himself a greater hole.