Response to - Ergun  praying in the "Hallway"

Ergun Caner had uploaded a picture on his website back in 2004 with the title "Dr. Caner in the Mosque with his father". The same picture was later uploaded on his facebook account with a different title because the person in the picture is not actually his father.

I noted that they are all wearing shoes in the picture which of course does not happen in Mosques. In addition to this, you can clearly see that the girl in the picture is wearing fancy dress as though getting prepared to perform in a nativity play.

Ergun made the following comments in an exchange of messages with a Muslim on facebook:

"The truth is, it is not only laughable, but it does not serve any purposes whatsoever. If their desire is to win followers to Allah, then they seriously need to find something other than a "He was not a Muslim" argument. It is pitiful, and even a bit funny.

The entire basis for their arguments? My accent? Wearing shoes in the Masjjid, when I was in the hall, not the prayer room? I am afraid this is a wasted effort- and simply shows they are out of arguments."

If this is a hallway where shoes are permitted, then that does not explain why the boy next to him is praying?

Does one pray in a hallway with his shoes on whilst inside a Mosque?

Why would people make an effort to stand in a straight line with your hands just above your naval in a hallway if you were not praying? Seems as though Ergun is making a lie upon another lie.

Another important thing to note is that Ergun first had this on his website in 2004 saying that the grey haired imaam standing in the picture was his father, which is a lie.

After all the allegations were placed on him about being a fraud, he uploaded more pictures onto his facebook of his childhood. Some of these pictures included pictures of him standing with his father: 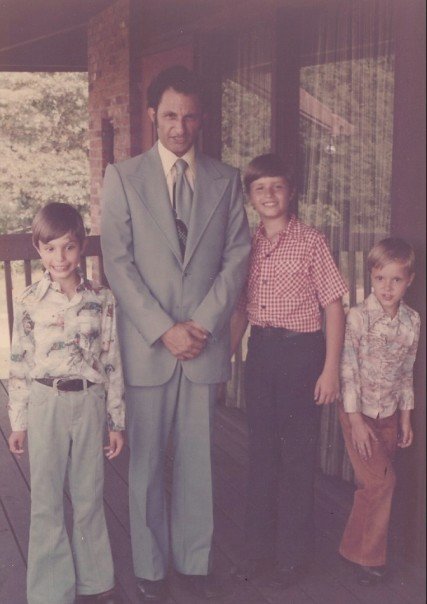 The peculiar thing about this newly uploaded picture is that his real father looks nothing like the "imaam" who Ergun said was his father.

Ergun is a lot older in these newly uploaded pictures, and somehow his father got younger? I always thought that people age as time goes by. This is all ridiculous and I am utterly shocked that Ergun Caner intended to fool people in such a manner, did he not think people would notice?

So to sum up - Ergun initially intended to fool his fans into thinking that the grey haired imaam in the picture was his father, but he lied again. This is clearly evident in this more recent picture uploaded onto Ergun's facebook account (which is now closed because he refused to answer simple questions about his authenticity).